Artificial intelligence (AI) was a fixture in popular culture long before it became a computing reality. From Gort in The Day the Earth Stood Still to Hal 9000 in 2001: A Space Odyssey, kids grew up with riveting associations of AI as the soulless equivalent of human intelligence. It’s no wonder popular notions of AI are at sharp odds with reality.

While movie scripts continue to explore the fictional possibilities of thinking machines, AI has quietly crept into daily life without most people realizing it for what it is. Virtually everyone has been touched by AI in some way, and that’s about to accelerate. AI driven digital transformation has officially gone mainstream.

Continuing advances in artificial intelligence will have a profound effect on enterprise networking, and everyone managing and using those networks. Consequently, you’ll hear a good deal from Windstream Enterprise about making sure your network is AI ready going forward. But first, because AI is far from being universally understood, it’s worth a quick look at what artificial intelligence is, what it’s not, what it has to do with the cloud, and why it is coming to your network – if it hasn’t already. 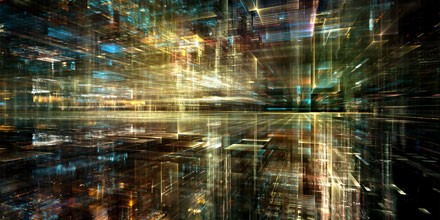 AI in a nutshell

In general terms, AI is the programming of computers to simulate the natural intelligence that you, I, and all other living creatures possess – not to replace human intelligence but to perform essential analytical tasks far more quickly and accurately than people can. It’s data-crunching to reveal patterns and iterations with striking speed.

The autopilots used in commercial flight are an early example of AI. Amazon product recommendations, based on your past purchases/searches and those of other customers with similar interests, are a more recent example, as are credit card companies’ ability to quickly detect potential fraud. These are just a few of many ways AI takes over tasks that could be performed by humans – just way faster and more accurately.

Airlines, Amazon, and credit card companies are obviously large sophisticated operations, but AI is far from limited to industry leaders. While it’s true the largest enterprises are leading the way, with 80% currently investing in AI, smaller companies are capitalizing on AI, too – and faster than you may suspect.

With breakthrough AI tools entering the market at a brisk pace and the cost of AI coming into reach, IBM’s Bluewolf projected 74% of enterprises would be using artificial intelligence (or what they refer to as augmented  intelligence) within the next 12 months. When such a large majority have or are in the process of adopting a technology, it’s no longer “emerging” – it’s mainstream. And the smaller and mid-size enterprises that adopt AI are doing so for the same reasons the Amazons and credit card companies are: improving core business functions and speeding and personalizing customer experience (CX).

AI breakthroughs depend on data – lots of it

The term artificial intelligence suggests “thinking,” which to a computer is analysis based on algorithmic data processing. While the algorithms are essential to producing the results we seek from AI, AI is nothing without substantial data and computing power.

Amazon’s product-suggestion algorithms would be useless without a wealth of information regarding what you and others have purchased (and looked at) before. The more data they have, the better the recommendations. Similarly, if your credit card company didn’t have sufficient data to accurately identify potentially fraudulent behavioral/purchase patterns, crooks would get away with using your credit card, or you would get false alarms over legitimate purchases. Data is key to the intelligence. And the vast majority of that data is housed and analyzed in the cloud.

As AI continues to move into the mainstream, adopters of all sizes will move more data than ever before. As noted by BRP Consulting’s Perry Kramer in an interview at NRF 2018, the relationship between analysis quality and the data available to algorithms applies equally to smaller enterprises as to larger ones. Meaning companies of every size will need to be sure their networks are as fast and reliable as possible, to guarantee real time data transactions to and from the cloud to deliver on the promise AI holds.

Whether your own organization undertakes AI to improve the customer experience or core business processes, it will consume and process data on an unprecedented scale. That has profound implications for networking. Bottom line being, it’s time to get ready for a networking revolution to accompany the emerging era of mainstream AI.